The 15 Best Anime For Beginners

My Hero Academia: 5 Reasons Why The League Of Villains Is The Best Villain Group (& 5 Why It’s The Legion Of Doom)

Consequently, a good started anime should be relatively short (at least at the time of writing), allowing for potential fans to easily catch up with the plot without the daunting and fatiguing task of watching over a thousand episodes. This article will list 10 of the best anime for beginners.

The world of manga and anime is bigger and better than ever, and over the course of the 2010s, the Western world has fully embraced this particular form of entertainment and all its quirks. With anime in the mainstream, more pop culture fans than ever are looking for entry-level series that are short, high quality, and easy to follow. With that in mind, let's list 15 more beginner-friendly animated

This animated series takes place in a magical version of modern England, where Celtic and Scandanavian monsters and fairies live unseen in the wilds, far beyond human civilization. It's almost like a fairy tale out there.

Viewers can easily relate to the familiar critters of this series, from a church grim to dragons and the famed Titania and Oberon. That and the fascinating skull-headed Elias can make for a compelling watch, all in 24 episodes.

A few works of fiction have portrayed the inner workings of the human body in this fashion, and

does it in true anime style. The human body is a vast city of apartments, furnaces, and aqueducts, and hardworking cells keep it all running.

The animation is gorgeous, the cells are well-explained (this is an educational show), and the humor is spot-on. There are action scenes too, when white blood cells and killer T cells do battle with bacteria and viruses (and even cancer cells). This show is 12 episodes long, with a second season on the horizon.

Here is another educational animated series.

's first season is 24 episodes, and there is bound to be another season. The plot: a mysterious energy wave turned all people to stone, and 3,700 years later, the brilliant teenager Senku Ishigami awakens from his stony silence.

He's in a new Stone Age, and with the power of science and faith in the human race, he's going to rebuild everything, one rediscovered invention at a time. He's the kind of guy who can make functioning light bulbs in a 200,000 BC-style setting.

Fans of sci-fi and heartbreak alike may enjoy this series, which has elements of

The Fault in Our Stars

(quite the combo). In this world, realistic androids are a reality, but they have limited life spans and must be manually retired (sometimes against their will).

Male lead Tsukasa Mizugaki is a newly hired robot retirer, and his companion is Isla, a robot who is on the verge of being retired herself. Tsukasa comes to love Isla with his very human heart... just in time for it to get broken.

. In both series, a non-magical child is inspired by his/her hero, then enrolls at a magic school to emulate that hero.

10 Best Vampire Anime For Your WatchList

In this case, the heroine is Akko, who is dying to become a witch to help people and make them happy. Her magic powers are minimal, but she's trying, and she makes many lovely friends at witch school.

may be one of the most underrated anime of the past decade. Based on a classic manga series from the 90s,

tells the story of a young man named Shinichi who wakes up to find that his right hand has been eaten and replaced with an alien parasite.

The alien, eventually called Migi, is part of an invading force that has been taking over various humans. Migi, however, was unable to take over Shinichi's brain and eventually forms a close bond with his host.

is one of the few examples of LGBT+ love stories in anime. The series follows the titular Yuri, a Japanese figure skater who is considering quitting the sport, eventually catches the eye of Victor Nikiforov, one of the world's most renowned figure skaters.

Victor becomes Yuri's coach as Yuri rediscovers his love for the sport and a charming love story begins to develop between the two characters.

is one of the most iconic and important anime of all time. Taking inspiration from western imagery and stories,

is essentially a Wild West story that is set in space and brings together a group of mismatched characters on adventures across space.

The series only lasted for one season and a movie but has remained popular in the years since its release. If you're thinking of starting to watch anime, this would be a fantastic jumping on point. 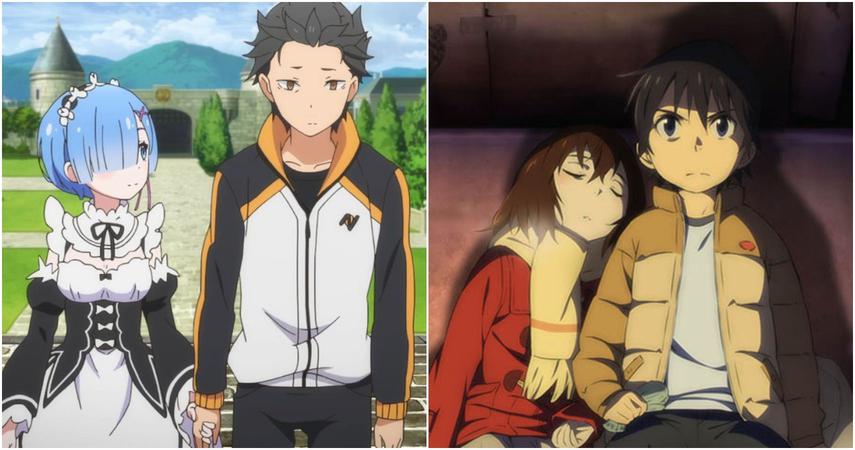 started as web manga that eventually took over the world after it was the subject of a massively successful anime adaptation, with the property even spawning its own video game. The series follows Saitama, a man who has trained his body to such an extent that he is able to defeat enemies with one punch.

The series is a satire of the hero and anime fighting genre and it truly is fantastic with its material. The series is also relatively short which makes it an easy series to catch up on.

Re: Zero Starting Life On Another World

Despite only receiving one season, at the time of writing,

Re: Zero Starting Life on Another World

is one of the most popular anime of the past few years, with the characters of Rem and Ram being particularly widespread across the anime merchandise.

The series follows Subaru, a young man who ends up being transported from the modern world into a fantasy world. In this world, Subaru learns that if he is killed, he resets to a 'checkpoint'; allowing him to alter his actions and try again.

is one of the most popular due to its incredible first season, with many referring to it as the

of anime due to its intense and graphic plot. The series is set in an apocalyptic future in which humanity hides behind a walled city in order to keep out the Titans, who are these giant creatures that feed on humans.

The series has some of the most compelling mysteries and intense anime action scenes of the past few years, meaning that it is certain to hook any new anime fans.

As is the case with several anime titles on this list,

is an iconic and highly influential series that is perfect for beginners due it compelling and closed story.

follows Yagami Light, a high school student who discovers a Death Note at this school. This book gives Yagami the power to kill anyone whose name he writes in the book, with Yagami using his power to enact vigilante justice.

Yagami's actions eventually bring him into conflict with an eccentric detective known as L, leading to a compelling game of cat and mouse between the two characters.

In a similar vein to

is one of the most underrated anime of the past decade. The 12 episode series is a dark and intense story that follows a 27-year-old man called Satoru Fujinuma, who possesses the ability to 'rewind' to avoid a tragedy. However, after a murder in his present brings back forgotten memories of his childhood, Satoru rewinds to his childhood past.

The series is as intense as it is heartwarming, with Satoru having to use his knowledge of the future in order to solve the murder in the future and catch the killer.

is quickly becoming one of the most popular anime of the century. The series is set in a world in which superpowers, or quirks as the anime refers to them, are held by around 80% of the population, which eventually leads to a hero/ villain society.

Lupin III: The First Is A Perfect Introduction For New Anime Fans

The series follows a young man named Izuku Midoriya who is given the quirk of the legendary hero All Might and joins the most prestigious hero school in Japan, UA.

In a similar vein to

is one of the most iconic and influential anime of the past few decades. The series follows two brothers, Edward and Alphonse as they try to heal the damage inflicted on them both during an ill-fated ritual.

The series has some of the most intense action, compelling characters, and heartbreaking episodes in anime history, making it a perfect contender for someone's 'first anime'.

10 Classic Toonami Anime You Can Stream On Hulu Right Now