POWER down your kids’ gadgets an hour before bedtime – or their health could suffer.

This is one tip from the Royal College of Paediatrics & Child Health, who have issued the UK’s first formal guidance concerning kids’ screen time.

Devices can cause friction, kids who don't get enough sleep can suffer

They highlight how sleep patterns can be disrupted by long periods spent on phones, tablets and watching television.However, they stop short of telling parents exactly how long is acceptable.

Psychologist Adam Alter, a professor at New York University, has some advice for parents on managing their children’s screen habits – and the extent to which those habits infringe upon family social life.

Professor Alter has authored the groundbreaking book Irresistible: Why We Can’t Stop Checking, Scrolling, Clicking & Watching, which explains the effects of screen time on the brain.

Reading an ebook is the right kind of content.. just make sure to choose some kids novels

Some of it is more likely to make our children distracted or even unhappy.

Chatting with loved ones who live far away, playing educational games and reading ebooks are perfectly healthy screen pursuits.

Get outdoors where there is less temptation for screen time

OLDER kids sometimes struggle to understand why they shouldn’t spend every waking minute in front of a screen.

A helpful tool is to explain the concept of balance.

In the same way we balance small servings of dessert with larger portions of healthy food, we also need to balance the “empty calories” of mindless screen time with face-to-face conversations, physical activity and time spent outdoors.

THE American Academy of Pediatrics suggests ZERO screen time until kids reach between 18 and 24 months of age.

That is easier said than done, particularly when older kids begin to watch television around their smaller siblings.

If your youngster does start watching TV before the age of 18 months, don’t simply accept you have already lost the battle.

Instead, try to limit their screen time to a realistic hour a day.

Don't use as babysitter

YOUNGER kids tend to be mesmerised by screens, so it is tempting for parents to treat TVs and tablets as “miracle babysitters”.

It is far healthier to think of a screen as a second pair of hands.

Kids are more likely to benefit from brief periods of screen time when their parents sit with them and together they discuss the shows they are watching.

WHEN young kids master tablets and phones, they jump rapidly from one app or game to another.

They are more likely to learn to concentrate, persist and learn from the content they are consuming if they are taught to watch on a TV without a remote control or on a tablet with its screen locked to a single app.

Govern own screen use

Set an example with your own screen use

SMARTPHONE use isn’t only a problem with children.

It can be an issue for adults too.

Youngsters have told me: “I wish Mum and Dad wouldn’t sit at the dinner table with their phones.”

But they will notice when your attention is fixed on a screen instead of them and think: “Why is this shiny rectangle taking all the attention? It must be important.”

Try to lead by example and don’t be constantly checking your phone when you are around your children.

Use colours on screen to point to real life objects

KIDS are less likely to see the digital world as an enticing alternative to the real world when parents draw links between what they watch and everyday life.

After youngsters see a show about colours, for example, while their parents are folding laundry they can point out the colour of each item of clothing.

That reminds kids these same colours exist and can be enjoyed in reality too. 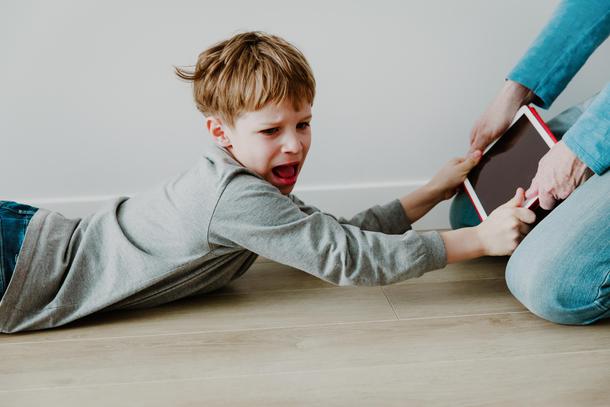 Let your kids get bored

Kids hate to be bored, but it can be useful for them

KIDS hate being bored but it is important they learn to entertain themselves, can think creatively and develop communication skills with other people.

Phones can be richly entertaining and are almost always available, making boredom all but extinct.

As soon as phones enter kids’ lives, they get pulled out at the first twinge of boredom.

These devices are portable, so children know they can access them everywhere. But they shouldn’t be used as a crutch for every idle moment.

PEOPLE who live in big cities adjust to the pace of urban life and find smaller towns or the countryside comparatively slow.

The same is true of kids watching frenetic TV shows. They come to demand that level of engagement from every experience and are less tolerant of things like reading and having a conversation, which require time, concentration and practice.

It’s important to expose kids to slower forms of educational TV content when they are young and to gradually increase the pace of that content as they mature.

No screens in bedroom

SCREENS emit a bluish-white light that tricks the brain into thinking daytime even when we use them at night.

Kids who use screens within an hour of bedtime and during the night experience jetlag-like symptoms that make it harder for them to fall asleep, stay asleep and wake refreshed in the morning.

In general, kids shouldn’t use screens an hour before bed.

And they shouldn’t have phones, tablets and computers in their bedrooms.

MOST READ IN FABULOUS

July 13: Looking for security as well as love could lead to a special romance

Celeb Insta trends that will knock thousands off your home's value

Sleep guru says you can put kids to bed at 5.30pm & get them to sleep through

WE assume we are punishing children by preventing them from being on screens.

But they are happiest when they are deeply engaged.

It might sound trite but the best way to do that is spending time doing things together like going for a walk and talking about what you see.

Get into good habits

Try to ban use of technology after 5pm

CHILDREN are happiest when their world includes some degree of structure and predictability.

It is important, then, to form consistent screen-time habits that include periods away from their devices.

For example, it is easiest to teach kids to discuss their days at the dinner table when they have learned from a young age that no one uses their phones or watches television during dinner.

Children respond well to routines, so you might introduce a rule whereby you don’t use devices after 5pm, say.

GOT a story? RING The Sun