How to watch Naruto in order

If you are a fan of manga, then the chances are that you already know all about Naruto.

But with more people being drawn to the genre in recent times, it can be quite a daunting prospect trying to work out how to work your way through all there is to offer – particularly with Naruto which has a ton of episodes and movies to binge-watch.

Combining the stories and the films, here is what we think is the best way for you to go about watching the franchise from it’s very beginning, all the way up to the most recent iteration.

How to watch Naruto in order

With the first two shows, you are going to find yourself jumping around between the show itself and the various movies that have come along to accompany them. So start at the beginning and keep working your way through the first 101 episodes. Once your there, the movies start and below is where to slot them all in.

After episode 101, watch Naruto The Movie: Ninja Clash in the Land of Snow

After episode 160, watch Naruto The Movie: The Legend Stone of Gelel

After episode 196, watch Naruto The Movie: Guardians of the Crescent Moon Kingdom

Now finish the remainder of the show.

Buy Naruto on Blu-Ray for

. Several of the movies are currently streaming on Netflix.

Much like the original series, start Naruto Shippudenn from the beginning but its time you won’t have as many episodes to get through before you run into your first movie break – 32 episodes to be precise. 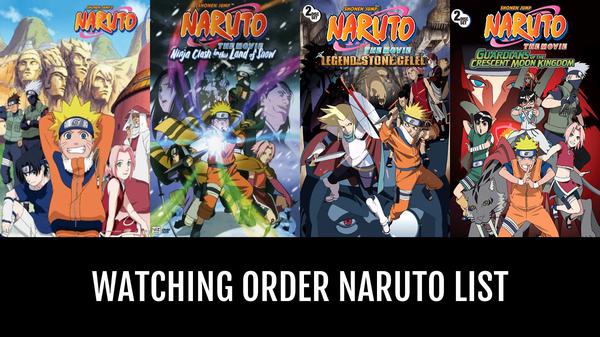 After episode 126, watch Naruto Shippuden The Movie: The Will of Fire

After episode 251, watch Naruto The Movie: Road to Ninja

After episode 493, watch The Last: Naruto The Movie

There is a lot to get through with this show, but you can start by buying the first season of Naruto Shippudenn on DVD for

. Several of the movies are currently streaming on Netflix.

This one is much easier. Before starting the show, make sure you watch Boruto: Naruto The Movie and then head on over to the main show and binge through all the episodes. Nice and straightforward.

This is the most recent entry in the franchise, so far, and puts the focus on Naruto’s son, Boruto.

The first season of Boruto: Naruto Next Generations is on DVD for

If you’re looking for something to watch tonight, check out our