10 Shonen Anime You Should Watch If You're New To Anime

Are you tired of watching the same shows over and over or feeling like you just can't find anything interesting to watch? Have you been wanting to get into anime but you're not quite sure where to start? Shonen anime might be the perfect place to start.

The genre of anime known as shonen, or shounen, is characterized by a young, often male, protagonist who is faced with a challenge and wants to improve in their skill or trade. Shonen anime will often feature great battles and occur in complex worlds with some variation of magic or inept power. If this sounds appealing to you then you are likely on the fast track to finding your next favorite show.

Naruto - A Young Boy Who Wants To Become The Greatest Ninja

is the perfect anime for anyone who loves a

. Named after the protagonist, the show follows a young orphan boy with a mysterious past, ostracized by the people in his village due to his connection with a vicious monster.

Naruto yearns to become a great ninja and eventually the Hokage, or village leader, even though he is constantly looked down on and despised by the other villagers. Although the show has many great battles, it focuses on the idea that true peace can only be forged from love, kindness, and teamwork.

follows the story of

as he searches for his father who left to become a Hunter, someone with special privileges who works to track down monsters and treasure, when Gon was very young. In order to find his father, Gon decides to become a Hunter himself and sets out to take the Hunter Exam.

Gon soon learns to develop his own special abilities and meets a new group of friends. This anime is great as each arc builds on the last while introducing new challenges and characters. Viewers will always be kept on the edge of their seats to find out what new adventure awaits Gon and his friends.

is a must-watch for

anyone who enjoys online gaming

and is incredible even for those who aren't involved in the gaming world. Kazuto "Kirito" Kirigaya is one of the first to play

, a virtual reality multiplayer game in a world reminiscent of Camelot with swordsmen, dungeons, and unique beasts.

On the launch day of the game, the players learn that they have been forced into a sinister situation when the creator of the game informs them that they cannot leave the game and that death in the virtual world will result in their death in the real world. Kirito and the other players must beat the game without dying if they ever want to return to their regular life.

One Punch Man - A Guy Who's Just A Hero For Fun

is filled with epic battle scenes and lots of humor. The story takes place in a world full of heroes with incredible powers and follows Saitama, a goofy-looking guy who is extremely powerful and refers to himself as someone who is just a hero for fun.

15 Anime To Watch If You Like One Punch Man

Unfortunately, Saitama really isn't having much fun as he can defeat almost any opponent with just one punch. As he searches for popularity and a great battle, Saitama gets into many hilarious situations. For viewers who enjoy this show,

is a perfect next watch.

Perfect for anyone who enjoys dystopian tales and creepy monsters,

has quickly become many viewers' favorite anime. When humanity is threatened by Titans, giant man-eating creatures who are even scarier because they look human as well, the military must protect their cities.

The protagonist, Eren Yeager, sets out to join the military in order to get revenge for his mother who was eaten by a Titan. Eren, along with the other members of the military, must fight these

and find a way to bring peace and safety to their people.

's family is attacked by a Hollow, an evil creature formed from a tortured soul, he must borrow the powers of a soul reaper to save the lives of his sisters and father. Although Ichigo had always been able to see ghosts, these borrowed powers change Ichigo's fate forever and allow him to save the souls he couldn't help before.

is great for anyone who enjoys sci-fi, tales of teamwork, and sword-fought battles. Ichigo faces many strong and unique enemies and each episode will leave viewers on the edge of their seats, rooting for Ichigo as he fights to save his friends and his fellow humans. 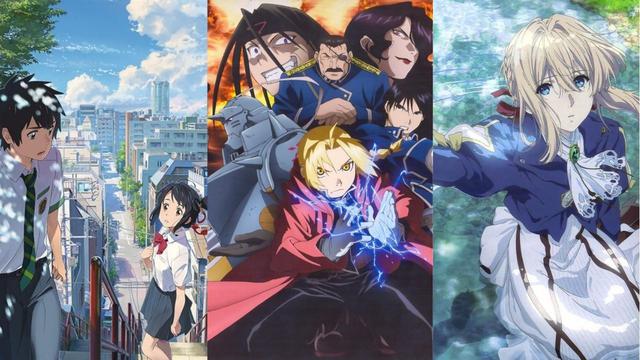 My Hero Academia - Can A Boy Without Powers Become The Best Superhero?

In a world where the majority of humans are born with Quirks, special powers, Izuku Midoriya, a Quirkless boy whose biggest dream is to become a hero, has to deal with a lot of bullying. When Midoriya's idol, All Might, saves him from a monstrous villain, he finds himself being given a huge opportunity.

15 Anime To Watch If You Like My Hero Academia

Upon meeting Midoriya, All Might decides that the Quirkless boy is the best fit to inherit his Quirk "One For All", a unique quirk that allows the user to pass it on to a new future hero. Midoriya must train and learn to control his new Quirk in order to become the great hero of his dreams and protect the people of his world.

is perfect for fans of the Marvel and DC universes who enjoy a great superhero story.

Tokyo Ghoul Features A Lot Of Coffee and Cannibalism

is one of the more

. Taking place in a world inhabited by ghouls, beings with great strength and unique powers who consume humans, there is a constant battle to protect humans from becoming food.

When Ken Kaneki is attacked by a ghoul, he is saved by doctors who transplant the organs of the ghoul, who was crushed and killed by a collapsing building, into him. Kaneki wakes to find his body changing and soon realizes that he is transforming into a ghoul and must make the choice between accepting his new form and feeding or rejecting his reality and dying of starvation.

Demon Slayer: Kimetsu No Yaiba - In Order To Save His Sister, A Boy Must Learn How To Kill Demons

follows the story of Tanjiro who returns home one day to find most of his family has been killed and eaten by a demon. The only member of his family who remains is his sister who has been turned into a demon.

Tanjiro chooses to protect his sister and makes it his mission to save her and return her to her human form by becoming a demon slayer and tracking down the demon who hurt his family. The unique abilities of the demon slayers and the frightening adventures Tanjiro embarks on

Widely regarded as one of the greatest, and longest, anime of all time,

or that you can set down and come back to anytime. This pirate-filled anime follows Luffy, a young pirate boy with a body that can stretch like rubber.

Luffy intends to become the next Pirate King but in order to do so, he must gather a strong crew and find the mysterious treasure "One Piece". Luffy is a goofy, adventure-loving pirate who transports viewers into an exciting fantasy world.

Sarina Davis is a reader, writer, and anime enthusiast based in Colorado Springs, Colorado. She has taught English to students of all ages and is passionate about the value of comics, manga, and graphic novels in the literary world. Sarina is now a proud writer of Anime Lists with Comic Book Resources. When she is not watching anime or reading, Sarina enjoys long walks in the park with her puppy and cooking delicious vegetarian meals.