Like every other Eid, Salman Khan, without fail has released another gem out of his sleeve, the much anticipated movie of 2021, RADHE - The Most Wanted Bhai. Let me be honest with you, I did not go with much expectation into watching this movie and was still left disappointed. I mean, one can still expect some kind of LOGIC to be there right? But really, no. To begin with, the first 10 minutes into the movie tell you how unrealistic and wildly fiction this movie is going to be.

Radhe, Salman Khan, enters a building/house via a glass window just like a storm of wind and it is shown via a man who is standing next to it, that as he enters, the glass breaks and one of the glass shard hits that man's cheek and it starts bleeding. It takes a moment for him to realise what actually has happened but by that time, Salman Khan has already butchered 30 people and has not even a single scratch up his body. Oof, crazy right? Well, this was just the first 20 minutes of the movie and one of the most DECENT fighting sequences in the film. Based out on the Mumbai's drug scene and Radhe, repeatedly telling us that he will "Clean this city up" and also that "Ek bar jo maine committment.." dialogue makes a comeback, as if we were really missing it that is.

From the story line to the choice of actors, everything is nothing but stale. Disha Patani acting as nothing but an eye candy just to show the soft side of Radhe that even if he kills and hurts 50 people in the day, he too is a human and has feelings for his senior inspector's sister (rings a bell?) pretty much. Radhe starts and ends with a fighting sequence and in between is a boring, overused and underwhelming piece of story that I could guess what is going to happen in the next scene. Not much effort has been made to write the story correctly but yeah, the fighting sequences are very nicely shot. An action buff is in for a treat or if one is a Salman Khan fan or if you have 250 bucks handy and 2 hours with literally nothing else to do. 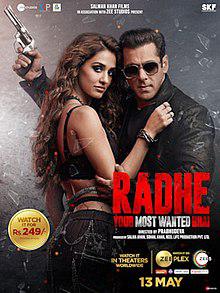 Y'all are upset about people calling The Photograph boring when Issa has explicitly expressed the desire to play th… https://t.co/qdJVbd3q9H

Radhe is comfortably a pass for someone who wants to watch something with logic, because it has Salman Khan in it so probably they used up all their budget on that, having logic was bleak. I have really tried to keep this spoiler free, if someone wants to watch it, but I am going to try and explain a fighting sequence, so you can stop reading if you plan on watching Radhe. In the last sequence, Randeep Hooda (playing villain) and Radhe are having a big fight where in, Randeep is hitting Salman Khan with an iron rod.

Now usually the clink sound comes when iron hits on iron etc. and NOT the human body organs, like Salman's arm. And that was exactly what was happening. I literally could not control my laughter. Just imagine! Someone is hitting your arms, both arms one by one with an iron rod and the sound coming out is not from your mouth, but, a very sharp clink sound from your arms, as if iron is hitting iron not the human bone! Well, I could go on and on and on and on. But, there is no logic here and no original story or not even ORIGINAL DIALOGUES. Like, come on man! P.S. If you think Radhe is available on Zee5, you're wrong. You have to pay 250 bucks even if you have the subscription (that's how pay per view works) and then the movie will be available to you for 4 hours. Yeah, try to enjoy.