just opened in theaters on Japan on Friday. Based on

's manga of the same name, the anime film is about making a live-action and is also

via video call to learn more about making anime under COVID-19, Hirao's outlook as a director, and his surprising connection to the film.

There isn't much information about this anime released yet, so to start with, could you summarize the story for us?

Before doing this interview, I had the opportunity to read the original manga. There's a character named Corvette, and I was surprised that his favorite film is

, which you also directed. I'd like to ask what was your impression when you read that scene.

I myself had no idea about it until someone introduced me to the manga. I didn't know that kind of manga existed. I remember feeling surprised when I discovered that a character in the manga calls

one of his favorite films. I had no communication with the creator about it; someone else told me. So it was a complete coincidence.

So did it have anything to do with why you decided to direct this film, after it was brought up to you?

The person who introduced me to

is a producer. He asked me to read the manga and tell him what I thought of it. From there, I was asked if I wanted to direct the film. It wasn't just a matter of whether it was interesting, but whether it has the themes I want to explore as a director.

One of the topics that came up when we discussed

was how it doesn't have a clear villain. In that sense, it's similar to

. That was something I liked about

, which was one of the reasons I decided to direct the film. It has themes that I want to express.

When I was reading the manga, a certain line stood out to me: “People who have escaped from reality will create a world just for them.” Does that line also ring true for you?

Hmm… In real life, it is one of the big reasons why someone will have the motivation to create a story. After that, when you're actually trying to make the story and deliver it to other people, I don't think that it's enough by itself. That's my personal opinion. Communication skills are important, and you need to keep in mind how other people will perceive your work. If you're the kind of person who can tap into what's inside you and it's accepted by everyone just like that, then you're probably a genius.

To what extent can you relate to the story of 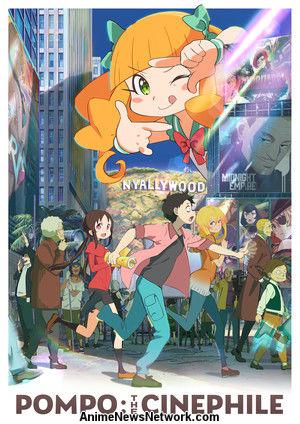 How to be a white cinephile with a "global" film taste: https://t.co/3HDCg6Icdk

from the position of a director?

I can relate to the feeling of creating things and the happy parts where they go around and work together as a group. It's like the continuation of a school festival. Animation has that feeling too, so that part is relatable. It's a very idealistic picture, you know?

There was another line in the original work that stood out to me. “Even anime can become film.” Can you agree with that way of thinking?

Are you talking about whether anime can draw you into a world and make you feel as if you're really there in the way a film can?

Personally, that's something I aim for when I create anime. It's true that, compared to a live-action film with real actors filmed in a real location, an anime can't depict a sense of reality on quite the same level. However, it can be easier to convey things like themes, symbolism, and characters. If the audience can understand and connect with those things, then I think that's connected to the cinematic experience.

Yeah. I'm an Osaka Designers' College alumnus, and I always had an interest in creating live-action. I initially thought of getting into the film industry, but that didn't end up panning out. I ended up choosing animation because I like anime. But if we're talking about personal interests, then yeah, I've always had an interest in live-action films.

For the works you've been involved in so far, have you ever been conscious about having live-action influences?

Yeah, I might have influences. Although, that was the trend at the time I became a director. There was a movement to make the compositing in anime look more like something filmed with a real camera, and that's still continuing to this day. For example, there are effects replicating a camera lens, and the lighting is done with consideration to how shadows would appear if the sequence were filmed in a real location. My own work can be considered part of that trend.

As for how that applies to this film, there are two parts to it: The main story and the film-within-a-film. The main story is created in a way that's more picture-like, while the film-within-a-film is made as if it were filmed with a camera. The difference is that the former is drawn after picturing it through the mind's eye, while the latter is recreating what can be shown through a camera.

You've been involved in a number of

works. I think that there are many

works that stand out in a cinematic way, so did you learn anything about making cinematic anime at

One of my big takeaways from

is how to handle music. Normally with anime, there's a sound director. They're usually the ones to decide which soundtrack to play at which times, but at

they let me do all that myself. Some feelings can't be expressed through words alone, but they can be expressed alongside music. With the right musical choices, you can enhance the cinematic experience twice or threefold. That's what I learned at

Is there anything you've struggled with making anime in the midst of coronavirus?

At the studio, we separate the desks and hold meetings via video conference, although I can't quite get used to it (laughs). When you're making animation or any kind of film, there are a surprising amount of nuances that you convey to your team in person while you're working on it. It's kind of lacking when you do a video call. It's harder for people to understand what you really mean. There are times when the work takes longer to do because of that.

I feel indebted to the staff of

. They've been easy to work with, and they've proceeded with the production untiringly, so I don't feel like our work has been majorly delayed. Everyone's got a lot of motivation.