You don’t need to sit in a big theater to get the full movie experience.

that it will release all of its 2021 movies in theaters and on HBO Max on the same day. That means you don’t have to venture out into the world to see

next December—you can bring Timothée Chalamet and those big sand worms directly into your living room.

Watching movies at home on the kinda-big-screen is wonderfully convenient—you can eat a foot-long Subway sub without having to worry about getting busted by the ushers—but the experience can’t compete with the enormous screens and booming sound systems of a dedicated theater. With a little tweaking, though, you can make your home feel a little more like the local multiplex (minus the pricy snacks).

The Philips Gradient backlight system is a pricy way to make your TV feel more immersive.

Ambient light obviously messes with your TV’s picture by causing glare and reducing perceived contrast, but you also don’t want your room to be pitch black, either. According to the American Academy of Ophthalmology, a bright screen in a dark setting makes

, which causes fatigue. Adding some light behind the screen also makes the darkest parts of your screen seem even darker while you watch. Darker blacks in the picture increase perceived contrast, which makes the scenes seem punchier.

The backlighting doesn’t have to be fancy. Even a cheap LED strip from Amazon will do the trick. Just make sure you get the right size for your TV so you don’t get an inconsistent—and distracting—halo around the back of your display. If you’re feeling fancy, you can upgrade to the $200 Philips Hue Gradient. It syncs up with the Hue Bridge and can mimic the colors of whatever you’re watching on-screen. It’s an impressive effect, but a total luxury at that price.

If you don’t want to go through the trouble of adding light to your TV, you can leave the lights on low in your room. You’ll want to avoid any lights that make bright point-of-light reflections on the screen itself. You also want to avoid directional lights from the sides of the screen because they can throw a glare across the entire TV.

I cringe every time I see a home design show with a TV placed high above a fireplace or in some other elevated location. It may work for the decor, but there is a right place to put or hang your TV if you want the best possible viewing experience. Ideally, your eyeline will fall right on the centerline of the TV. Depending on your seating arrangement, that may be even lower than you expected. You don’t have to bust out the tape measure to get it perfect, but it’s also not that much work for a big payoff in terms of quality.

This is actually one area in which your home has an advantage over the theater already. After all, movie theaters do have

that only spans a handful of seats. The surrounding seats all suffer slight degradations in picture and audio quality.

Distance from your screen matters, too, but not quite as much as it used to. When TVs struggled to reach 720p HD resolution, sitting too close to a big screen would allow you to see the pixels more clearly, making the image look grainy. With 4K TVs, you have to get really close or go really huge to notice that effect. You can 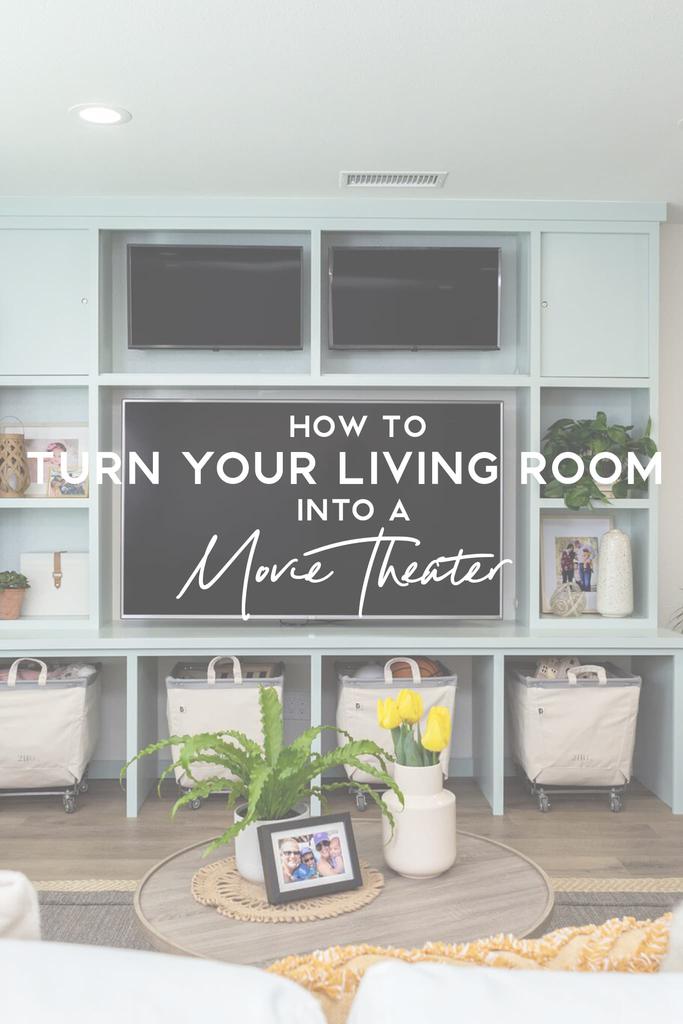 to see just how far you should actually be sitting, or simply sit close enough that the screen fills most of your peripheral vision, but doesn’t require you to physically move your head to see what’s going on at the edges of the picture.

Step up your sound

The superior audio experience at the local cinema isn’t just about volume. To get a true movie theater experience, you’ll want something that provides some kind of surround or directional audio. Theaters have speakers stashed all over the room, even behind the screen, to make the audio feel immersive. You don’t have to go overboard adorning your living room with woofers, but if you’re going to be watching first-run, top-tier movies at home, you probably want more than your paltry built-in TV speakers can offer.

If you’re just jumping into surround sound, a soundbar with Dolby Atmos built in is a great place to start for easy setup and pronounced directional effects. Atmos attempts to create a bubble of sound around the viewer that makes the viewing experience more convincing. It’s widely supported by most of the streaming platforms, and HBO Max is adding compatibility starting with the release of Wonder Woman 1984 when it’s released on December 25th.

There’s a wide variety of Atmos soundbars to choose from. If you’re on a budget,

comes in under $400 at the moment. Vizio makes

with a subwoofer. And you can step up to the excellent

, which adds access to the company’s wireless music streaming platform.

Soundbars can go up into the thousands of dollars, but if you’re simply upgrading from TV speakers, it’s probably unnecessary to spend that much cash right off the bat.

If you never dig into the various modes on your TV, you might be missing out on some performance. For instance, gaming mode on most televisions tries to prioritize responsiveness so you don’t notice lag between the controller and the screen as your play. If you’re using HDMI 2.1 and a compatible console like the PS5 or the Xbox Series X, it will turn on automatically.

Cinema mode is a bit different. You’ll likely notice that it’s a bit more subdued in terms of brightness and saturation than the typical mode you use for watching TV. If you have motion smoothing enabled for everyday watching, you’ll also notice that cinema mode typically turns it off. That helps prevent your motion pictures from looking like soap operas. That motion smoothing is great for sports, but it’s terrible for movies.

If your TV has HDR—and it should—this mode will also provide the most accurate and vibrant colors your TV can produce.

Turn off your phone

With no ushers or other viewers around to bust you for looking at your little glowing screen during a flick, it’s tempting to check your notifications. But, those distractions really do impinge on your ability to enjoy a movie and process what’s going on. People aren’t nearly as good

as they think they are. Every time you look at your phone, your eyes will have to adjust again to the relative brightness and distance of the screen, which can be taxing if you do it too many times.

Not to mention that anyone who happens to be in the room with you will get annoyed. But then again, maybe that’s part of what makes your home more like the real theater experience.