Linux booting on the Nook Color

is a 7-inch tablet that was created by

. It runs a heavily customized version of old Android created by B&N. You cannot do pretty much anything in it other than read books bought from B&N. Thankfully, the Nook Color has a bootloader that is not locked and so it is easy to boot and load other operating systems on it.

has been ported to run on the Nook Color. This post shows you how to have CM10 running off a microSD card on your Nook Color. The best part of this is that your stock Nook OS remains safe and

CyanogenMod 10 booting up on the Nook Color

. At the time of this writing, there is no stable release of CM10 for the Nook Color. But, I found that the nightly releases work pretty well.

Stable releases of CM10.1 are now available for Nook Color from

. Please use that in the rest of this guide.

These are the steps I used to install CM10 on my Nook Color using a microSD card. This method is easy and safe to try and it leaves the original Nook installation as it is. You just need a microSD card of capacity 2GB or more. These steps are based on the

CyanogenMod 10 running on the Nook Color

We need a Linux 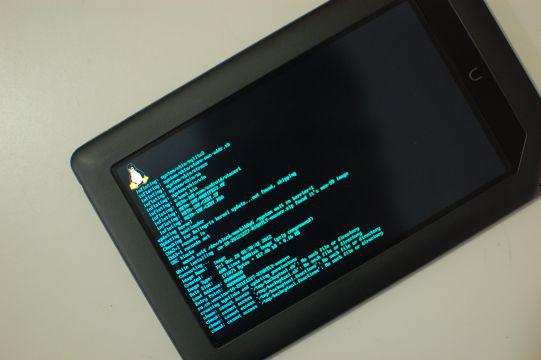 to boot from and to install the CM 10 ROM.

the image and unzip it to obtain a .img file.

Create a bootable microSD disk image using the above .img file. This can be done easily on either

. Once it is done, remove the microSD card and then re-insert it back into the computer. It will be mounted.

the latest CM 10 release for the Nook Color. Encore is the CyanogenMod codename for Nook Color.

Without access to the Google Play Store to install apps, a CyanogenMod is pretty useless. To have the Play Store and other Google apps,

Copy the CM 10 and gapps zip files to the microSD card. Do not unzip the files, just copy them directly. Eject the card from your computer.

Power on the Nook Color. The Linux image on the microSD will boot up, you will see the familiar Linux penguin image. Linux will install the CyanogenMod bootloader, CM10 and gapps from their zip files. After it is finished, it will power down the Nook Color.

, which will boot CM 10 from the microSD card. You will see the pulsing circle of CM 10 and should boot into CM 10 in a while.

You now have CM 10 running on your Nook Color. Once you give Google your credentials, you will be able to install Android apps from the